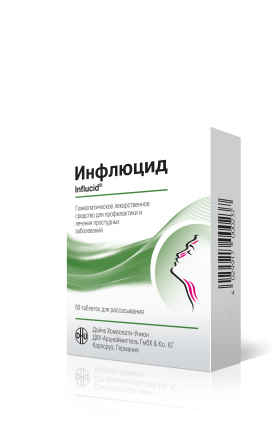 According to statistics, ARVI and influenza ― are the the most widespreaded infections among people. Taking into account the huge and ever-increasing variety of viruses that cause these diseases, we need a drug that can successfully cope with them.

Influcid* ― is a German complex medication , which has an antiviral effect not only on influenza viruses, but also on most viruses that cause ARVI**.

Early in the beginning of the disease Influcid promotes rapid elimination of different ARVI and influenza symptoms: headache, myodynia, fever, rhinitis and pharyngitis. Influcid ― is a powerful natural interferon inducer, but interferon ― is an important element of the first line of organism protection. Another advantage of Influcid ― is the ability to significantly reduce the symptoms of asthenia (weakness and feeling unrested) after past diseases, which means that you can more quickly return to a normal life after the disease.

Influcid ― is a drug that not only actively fights against viruses, eliminates ARVI and influenza symptoms, but also fortifies the immune system and defends from viruses. Due to this, Influcid can be used not only for the treatment but also prevention of ARVI and influenza.

Influcid helps to defeat the cold!

There are contraindications. Before use, read the instructions