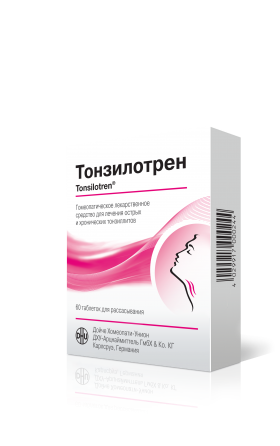 Probably, there is no man in the world, who has never had a sore throat. Tonsillitis ― is an inflammation of tonsils (glands). It may be acute (quinsy) or chronic. Tonsillitis is called chronic, when quinsy is repeated two or more times a year. This disease is not harmless, because it may cause immunity decrease, liability to frequent cold-related diseases, possibility of the development of dangerous complications, such as: heart, joints and kidneys diseases. So can we help our tonsils?

Tonsilotren®* ― is a German  medication,  which has been helping tonsils in quinsy and chronic tonsillitis for more than 75 years. It reduces inflammation, swelling and pain, restores the tonsils` barrier function, reduces the volume of hypertrophied (enlarged) tonsils, promotes tonsils lacunae sanitation (purification) from the caseous detritus (plugs), relieves swelling and inflammation of lymph glands, promotes the normalization of body immunity, accelerates healing of damaged tissues and prevents repeated quinsies.

Efficacy and high tolerability of Tonsilotren® have been confirmed by numerous clinical studies, in which the following was noted:

Adenoiditis ― is an inflammation of increased pharyngeal tonsil, which is accompanied by increased production of sticky mucus and mucosa nasopharynx swelling, complicates nasal breathing.

Adenoids together with other tonsils form so-called pharyngeal lymphoid tissue ring, a kind of immunity outpost, which main task is to meet pathogens and protect our body from them. When you have adenoiditis the first task is to reduce the inflammation of the tonsils and mucosa nasopharynx swelling in order to restore nasal breathing, make thick mucus more liquid and help it to leave the nose. In this case it will be useful to take Tonsilotren® together with Cinnabsin®.

Pain in throat and tickling? The solution is Tonsilotren!

There are contraindications. Before use, read the instructions